Sorry for the delayed post! We’ve been without significant interwebz time for a bit, island hopping and whatnot. (We know, we know.) So, to pick up where things left off…

We were picked up in the morning with our hangovers from the previous evening in tow. It was a long and bumpy bus ride, but we felt alive, awake, alert, and enthusiastic by the time we arrived at Elephant Nature Park, a refuge for rescued domestic elephants.

Elephants have played a large (ha) role in Thailand’s development as a nation, aiding in the construction of its infrastructure and most recently in the logging industry, which is now illegal. While these animals should be revered, domesticated elephants endure the worst kinds of cruelty. In addition to physical abuse, the elephants in shows and at elephant ride parks also suffer injuries from the weight of the riders and neglect from their caretakers. Lek Chailert founded the Elephant Nature Park in the ’90s and has since grown the organization, housing around 35 injured and retired elephants and creating a safe space for them to roam. They range in age from just a few months (babies!) to almost 80 years old… and they are adorable. See?

So, you might ask, what makes this place better than the rest? These elephants are already domesticated, so most of them cannot be released back into the wild. There are no performances, no tricks that the elephants must perform. If they want food, we feed them. And, with a few exceptions (like being led to the shore for a bath), they roam freely. If they don’t feel like being around humans, they don’t have to be.

But let’s get to the fun stuff — like when we met the elephants. When we first approached them to feed them, we were slightly intimidated. They are, after all, pretty enormous. They loved the bananas, pineapple, and watermelon we were giving them, deftly taking the fruit with their trunks and then tossing it into their mouths.

After our first encounter, we walked around the park some more to see the elephants in action. There were two babies at the park (and they didn’t know who the father was for one of them… SCANDAL). Elephants raise their young as a community, and they are incredibly protective. We saw this in action as one of the babies took a bit of a spill after playing on a log and then all the other elephants rushed over to comfort and provide cover for it. Mike actually caught it on video, as Kathleen freaked out because it was just like she had seen on all of the nature shows on PBS:

We then helped bathe the elephants, which they actually seemed to enjoy! And just a friendly warning: Their ears move a lot and they might accidentally smack you in the face if you aren’t paying attention. 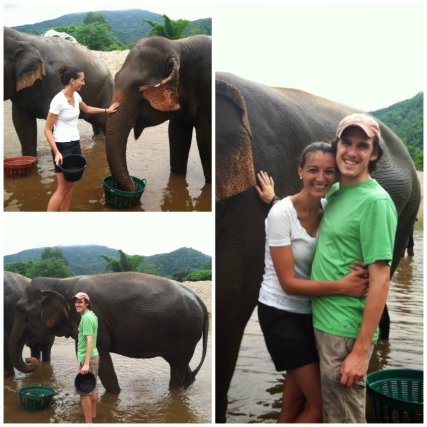 Because these elephants were domestic, they were completely friendly and let us scrub them and pet their trunks. One of our favorite moments happened when we sauntered up to an elephant hoping for a good picture to put on this little bloggy. The elephant turned out to be a bit of a photo hog…

We obviously loved the experience and would recommend the Elephant Nature Park to any and all who visit Chiang Mai. And while we wanted to stay for a while longer, we knew we needed to leave because part two — the beachy part of the vacation — was about to begin. We took a tuk-tuk to the airport and, in a moment of weakness, ate at the McDonald’s in the food court. To be fair, our only other option was a Burger King, but we were actually feeling a little noodled out anyway.

After consuming enough sodium for the rest of the week, we hopped on our 10:45 p.m. flight to Phuket, which we learned is pronounced “Poo-ket.” You learn something new every day, no?