We made it to Cambodia, but it’s been a long trip. We left Dulles at 12:30 on Thursday and arrived at our first real destination, Siem Reap, Cambodia early Saturday evening. 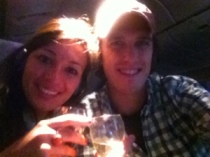 Believe it or not, the 13-hour plane ride from Dulles to Tokyo was a piece of cake. Or, a better way to put it would be four glasses of champagne. We had a wonderful flight attendant who definitely spoiled us. Additionally, there were no fewer than 50 different movies to watch. We aren’t going to tell you which ones we viewed, because that would be embarrassing (mostly for Mike).

We had a three-hour layover in the Tokyo airport. Like mature adults, we giggled at some of the products being offered in the vending machines. Want to get a little wild? Try a Crunky ice cream bar. Feeling dehydrated? Replenish with a refreshing Pocari Sweat drink. We didn’t try the sushi, because airport sushi — even in Japan — seems sketchy everywhere.

The next leg of the trip was the six-hour flight from Tokyo to Bangkok. It was a little rougher than the 13-hour flight, maybe because there was no champagne involved, but also because we were starting to feel just a wee bit tired and our seats were uncomfortable. We landed in Bangkok at 10:30 p.m. local time. It was hard to justify getting a hotel room before our 5:55 a.m. train — and we’re clearly hardcore backpackers/world travelers — s0 we spent the first real night of our honeymoon sleeping in the airport. Ah, the romance!

We were up and out the door by 4:15 a.m., but not after a quick trip to the Bucks. Not going to lie, their pastry selection is slightly better. We took a seat belt-less cab (with a driver who had a need for speed) to the train station, only to find a Dunkin’ Donuts. Fact: Thailand runs on Dunkin’.

We paid $1.60 per person for a third-class ticket (oh yeah) to Aranyapraythet, the jumping off point for those looking to cross the border into Cambodia. After a crowded, six-hour train ride, we avoided one visa scam and managed to get everything in order to cross over to Poipet. Once in Poipet, we took a shuttle to the bus and taxi station. We split a two-hour taxi ride with a mother/daughter duo from Ohio, who were fairly entertaining and had an interesting perspective on world travel. Of course, we ended up getting scammed at the end of the taxi ride. The driver had promised to drop us off at our hostel, but kicked us out at a hotel just after entering Siem Reap so the final leg of our trip was completed via tuk-tuk. Tuk-tuks are essentially motorcycles with little carts attached to back… so really safe, Mom.

When we finally arrived to our hostel, we had big plans to put our stuff down and go explore. But then we napped. And then it rained. The truth is that we were perfectly content staying at our hostel, HI Siem Reap. There’s a great vibe here, as well as a bar with $.75 draft beers. Life is good.

Sorry for a post mostly of travel logistics. It gets better, we promise!

Leave a Reply to Taking to the Open Road Cancel reply